Winterton was again the venue for ringing on Saturday 8th October. The nets were erected on the Friday night in 25mph NW 's with the hope it would calm down for the morning. Luckily the wind had eased to a more manageable 12mph Northerly, it was much cooler of late only managing a cool 11 degrees C.
Sadly it seems most of the Lesser Redpolls have moved on, there were however a few Redwing and Song Thrush going over. 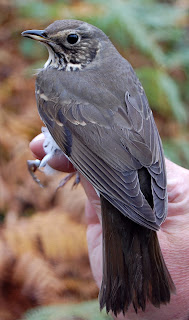 'Continental' Song Thrush (3)
A bit of a mixed bag in ringing terms with the Warbler numbers dwindling now, but still Meadow Pipits on the move in the dunes.
40 new birds were ringed and 5 retraps, the highlight being a Yellow-browed Warbler, the first since 2007. Among the retraps was a Chiffchaff that was originally ringed in the Spring on 23rd April 2011, where has this been hiding all this time ? 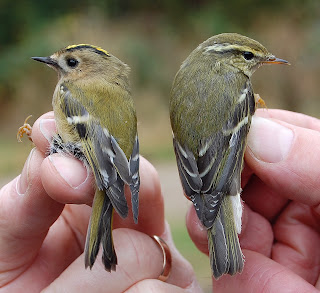 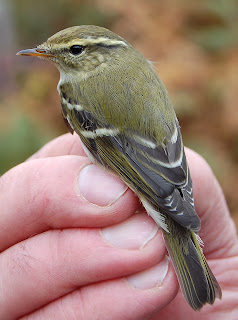 Yellow-browed.
2 Swallow were seen battling against the wind and another fly-over Grey Wagtail, Siskins and Brambling were seen flying over the tree tops. Common Daters were still on the wing considering the cooler temperatures with a pair seen in tandem.
Posted by Kevan at 20:31