The Snow Bunting are back at last!
We have been putting the seed out now for 3/4 weeks,but the local Crows and Pigeons have been finding it to their liking, however things were about to change with reports of the first Snow Bunting just North of us.
We must thank David for supplying us with Wheat again this year.

23 were first reported at Caister on Saturday 10th Nov with 30 there on Sunday, then Gary had 48 on the Wednesday and Tony seeing 60 on Friday, it was time to have a go before they moved off.
When they first arrive they are always mobile moving from one place to another and don't seem to settle down for the Winter much before the end of December.
We arrived at Caister early Saturday (17th) morning, 10 minutes later several birds where flying around our heads calling. Within minutes of the net being set we were catching our first Snow Bunting of the Winter. 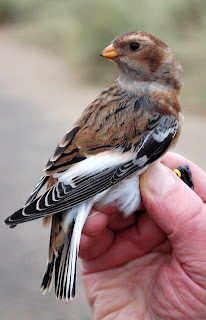 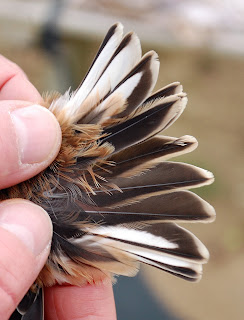 As above Tail feathers

46 Snow Bunting were caught with 41 new and 4 retraps and 1 control.
Of these 3 were colour ringed birds from Kessingland, Suffolk.
These have a BTO metal ring on left leg and a Yellow colour ring with a Black inscription on the right leg. Please can any sightings of c/r birds be reported to colin.carter5@virgin.net and BTO. 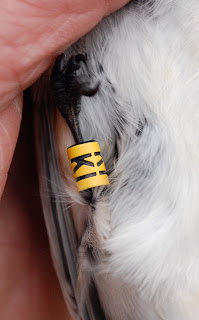