We had it in mind to do the roost again but the weather was awful on Monday night. So the plan was to have another attempt on Tuesday night weather permitting!
Tony and I arrived at Martham pits to be greeted with torrential rain above us but to the North of us blue skies and bright sunshine!!!
Then if by magic at 7pm the rain stopped, the wind dropped and two rainbows appeared! 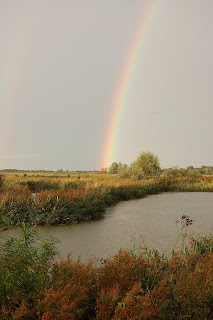 The pot of gold was in the reed bed.
It was a mad dash to put the four nets up and get the music on, almost immediately we were surrounded by Swallows and Reed buntings. About 50/60 Swallows were flying around, the Buntings were roosting in the same place.
9 Reed Bunting and a Chiffchaff were caught straight away, we took these back to ring, and watch the Swallows go in. Sharon and Justin then arrived just in time to do the ringing. 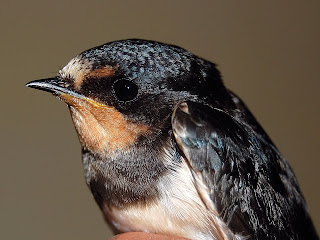 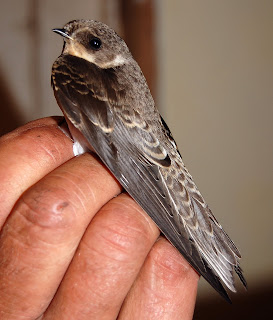 3J Sand Martin
In the end we managed 30 Swallow and a Sand Martin, all new birds. Hopefully they hang around a little longer and the weather will improve so we can have another go.
Posted by Kevan at 19:38