The weekend looked good again, bird's were everywhere!
The 10th Oct was going to be a busy day, ringing at Winterton  in the morning, Ducks at Hickling in the evening and a net up in the middle of the afternoon in the garden for a couple of hours! All this and it was Mels' birthday.
The nets were erected on Saturday night at Winterton by Tony, Gary and Dave ready for an early start next morning. Whilst putting the nets up Dave heard a couple of Yellow broweds calling and Thrushes  were still arriving in off the sea.
Sunday arrived with clear skies and a light Easterly blowing, the usual Pinkfeet could be heard leaving their roost and the Cranes 'whooping ' in the distance. Every bush seemed to have a bird in, so the nets were eagerly checked.
As usual we left the rare birds for other people to ring while we concentrated on the more common stuff! It was a fantastic morning catching 159 birds, so it was all hands to the pump. 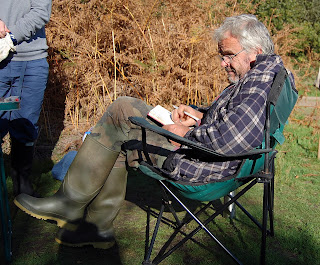 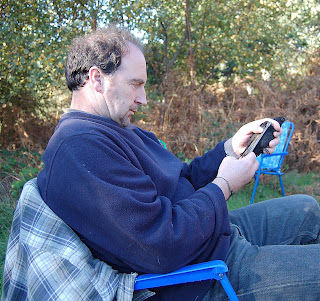 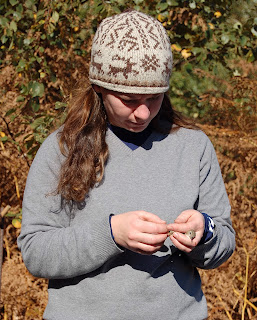 Sharon putting her new found knowledge to use in ageing a Garden Warbler.


It was great to see the return of so many Goldcrests after such a disastrous autumn last year, we only ringed 7 in 2009! One individual had a crossed bill but seemed to be in good condition. 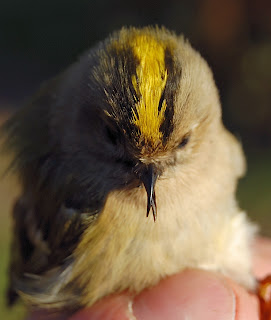 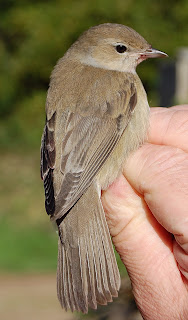 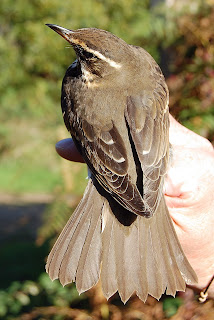 WILLOW WARBLER
In recent weeks there have been lots of Jays about, with several seen collecting acorns, also seen by Tony was the first Woodcock of the autumn. Also several Common Darters are still about .
When I eventually arrived home, the garden was also alive with birds, so a 40' net was quickly erected.
This produced another 12 birds, the best being 2 Brambling and a Coal Tit. 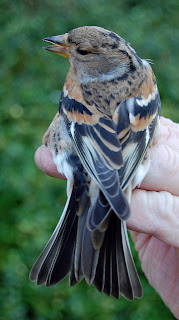 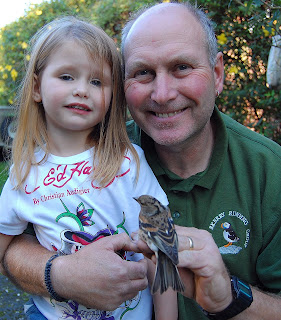 
Finally to round the day off the first visit this Autumn for Ducks was pencilled in at Hickling. 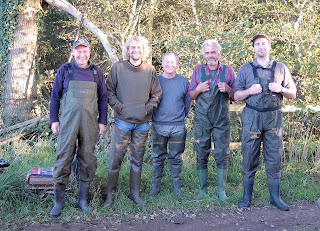 The team ready for action complete with frog legs!


James had kindly invited us along again and has been feeding the pond for a number of weeks. Plenty of Teal had been using the pond. Nets were set in the usual pattern, about 100 Teal and 7 Mallard were seen flying around.
Eventually 9 new Teal were ringed. 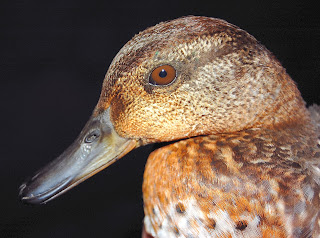 1st.W Male Teal,  some small green feathers can be seen above the eye. 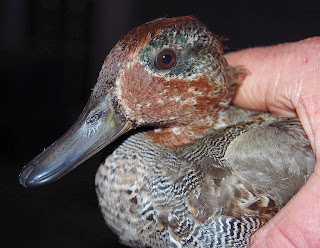 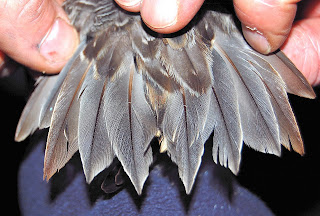