Snow Bunting numbers during the week were fluctuating again between 12 to 50 birds being present on and off. The tide had been high and washed some of the food out. So we decided to concentrate our efforts elsewhere.
I had a quick look Sunday morning and counted 64 with most feeding on the seed, at least two thirds of them were unringed!!! with no colour ringed birds present. So it goes to prove they are still coming in and moving about, we have ringed about 100 this Winter so far, where have they gone?


James kindly invited us back to the duck pond, it had thawed out a bit with a few Teal and Mallard using it during the week. We arrived at the pond 3pm Sunday afternoon, the gear was unloaded and the car parked, unfortunately I parked in the wrong place and duly got it stuck! 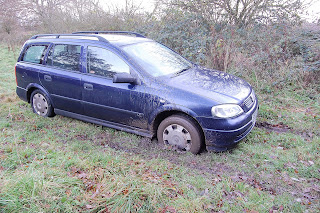 Oh dear
Luckily reinforcements were on the way, with the help of Dave, Justin and Gary driving, we managed to get it out, although it was now caked in mud after my first attempts of moving it.
With half the pond still frozen some energetic stomping was needed so we could erect the nets. Only 4 were put up, so it was the least number of nets we have had here. 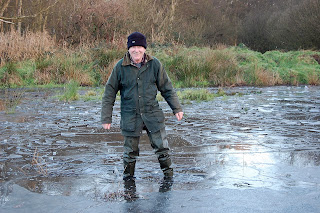 The ice man
About 30 Teal and 30 Mallard were flying around, with 7 Teal and a Robin ! caught. These comprised of 5 males with 3 of them being adults. 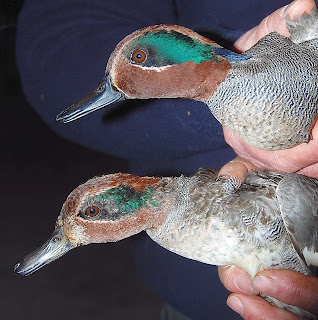 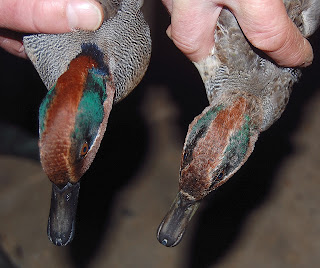 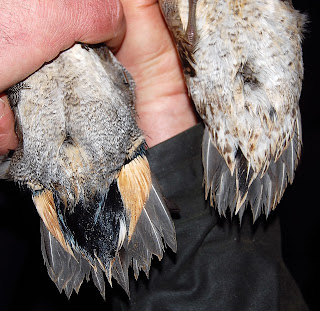 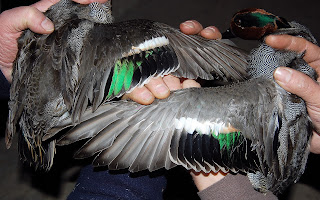 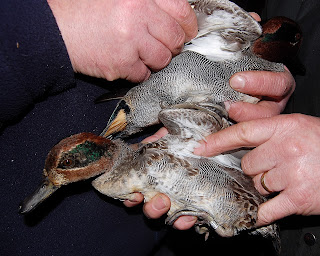 Adult top, 1st Winter bottom
7 Whooper Swans flew over the pond, with 2 Barn Owls and a Marsh Harrier hunting over the marshes.
Cranes and Pinkfeet could be heard in the distance. While waiting for the ducks at least 7 Woodcock were seen flying out of the woods.
We were standing under some Birch trees that had growths (broom's) in and amazingly watched at least a dozen Wren's enter the broom's to roost !
Posted by Kevan at 22:10