We kept a check on the Snow Buntings during the week, numbers have been fluctuating in the cold weather. At least 50 birds were about with around half not being ringed , 2 colour ringed birds were also in the flock ( from Kessingland). The wheat is still taking a hammering, Gary has been feeding every over day.
We decided to go again on Saturday as the birds are still moving about at present. Friday nights temperature was -4.5 degrees C so we expected a freezing morning, however when we arrived at 6.15 am the following morning it was a tropical +2.5 degrees with a light SW and light rain. 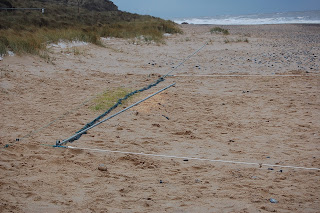 Ready and waiting.
Because of the rain we sat it out until it stopped, it eased up around 7.30am. We went to put some more seed out and around 45 birds were in the area ,so we decided to set the net and have a go.We quickly caught 17 birds with 16 being new. All the birds were 1st Winters (3's) with 10 Females and 8 being Insulae and 8 Nivalis and one being unraced.
Also on the beach were a number of waders , some obviously brought here by the freezing weather in land.
6 Redshank, Golden Plover, 2 Sanderling, 2 Dunlin  and 4 Turnstone were seen. Also present were 3 Med Gulls and a flyby Goosander.
Posted by Kevan at 20:17