At last some more Snow Buntings have turned up at Caister, we have had some ups and downs  this year so far. The 'flock' had been fluctuating quite a bit with 20/30 birds seen on occasions and at other times nothing at all! The seed has been deliberately covered over for what reason we can only guess at, this saw the birds move off to other areas.
Then with the colder weather moving in  more birds began to arrive, Gary went down Wednesday and saw about 40 birds, followed by Tony on Friday who had at least 60 birds in the area, the wheat is definitely taking a bashing at the moment, thanks must go to David for supplying this. 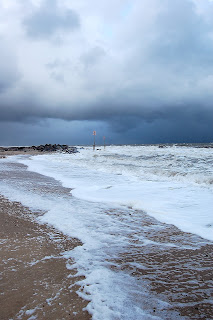 Caister beach on a cold Winters day
So with all this in mind a trip was planned for Saturday morning, we arrived at 6.15am and started to question why we had left our cosy warm beds for a screaming NE, temperatures of 2 degrees C (the wind chill made it much colder than this) and Snow showers. 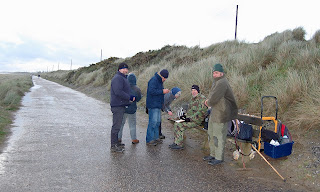 The huddle trying to keep warm, Dave sporting his Mexican moustache!
With the net malfunctioning a couple of times we still managed an excellent catch, catching 69 new, 1 retrap and 1 control all Snow Buntings. The retrap was from the last session and the control is a colour ringed bird from Kessingland, Suffolk. 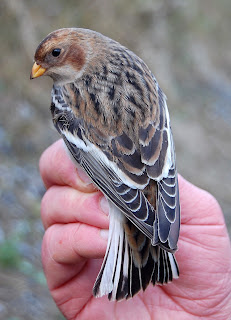 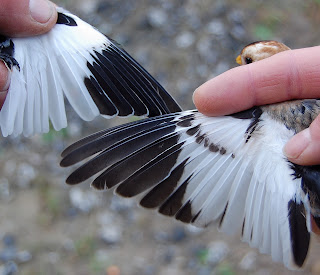 Adult male (top) and 1st.Winter male Nivalis race
The 71 birds were made up of 68 1st Winters, 56 were Females, with 40 being Insulae, 23 Nivalis and 8 un-raced. 1st Winter female Insulae birds being the norm.
About another 20 birds were seen during the morning, so there could well be a 100 birds about in the area.
Afterwards a quick trip to Rollesby saw Sharon extend her ringing knowledge to another species, Coot.
This was the only bird caught as the adverse weather settled in and the net was hastily taken down in a blizzard! 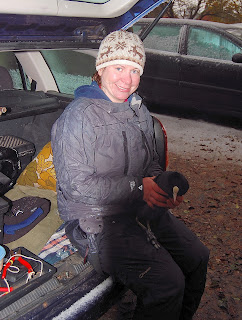 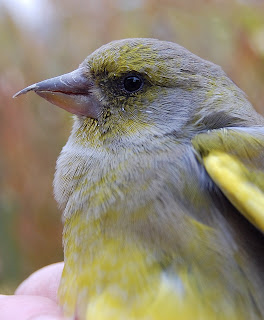 Adult Greenfinch with deformed bill.
Also in the garden on Friday night as the ringing gear was being loaded a Woodcock was seen on the back lawn. A net was gathered and the bird was quickly caught, a first for the garden.
Posted by Kevan at 22:19