We have been baiting the whoosh net area at Caister beach now for 3/4 weeks with no results until this week, then the Snow Bunting started to turn up, 10 were reported on Wednesday, then Tony had a look on Friday to find 36 and a Lapland Bunting feeding on the seed.
Saturday morning dawned with us setting the net on the beach at 5.45am ready for first light. 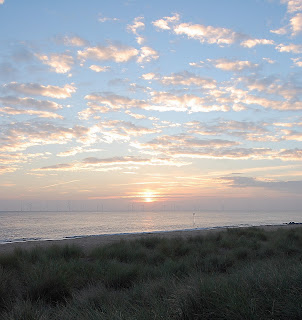 Caister beach early morning
It wasn't long before the first Snow Bunting turned up, 3 were seen in the half light in the trapping area, these were caught and the net hastily reset. Within 10 mins some more arrived and settled straight into the trapping area, the net was released for the second time and another 17 were caught alongside the Lapland Bunting. Another 10 were flying about but never came down. 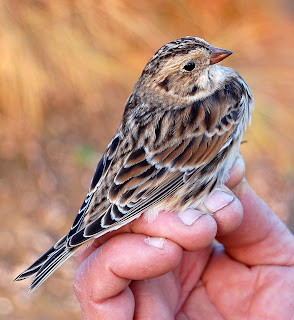 All the way from Santa's land ! 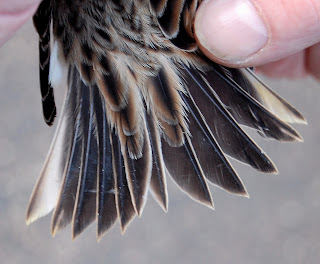 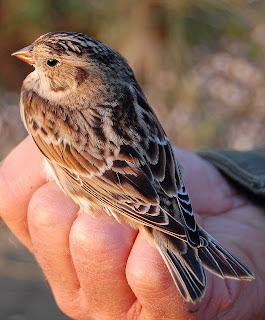 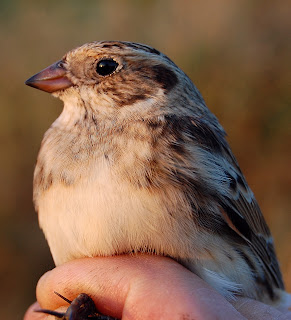 20 Snow Bunting were caught, 18 new and 2 retraps, one originally ringed 28/12/2009 the other 13/02/2010.
10 were of the Nivalis race ,5 Insulae race and 5 intermediates.The Nivalis birds were a surprise as we don't normally catch many of this race.
One bird was an absolute stunner, being an adult male 'nivalis' bird, a  scarce occurrence for us.Normally most birds are 1st. Winter Females of the Insulae race. 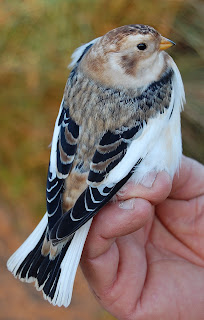 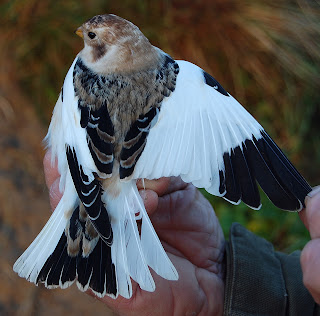 Adult Male 'Nivalis' Snow Bunting
Later in the afternoon another visit to Hickling for Ducks was planned. We arrived and erected the nets in calm dry conditions, within 10 mins of finishing the nets a large black cloud came over us and the heavens opened for the next hour and a half !!! 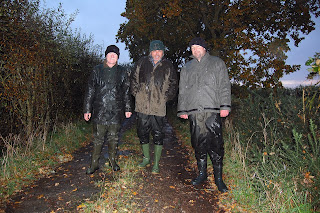 Looking a tad dejected !!!!!!!
We saw the evening out in the rain, about 30 Teal and 10 Mallard were flying around but very few tried to land. No birds were caught as they could see the rain hanging on the nets, as we packed up the rain stopped !
Sods law !!!!
Posted by Kevan at 22:41