We arrived at Winterton just after dawn on Saturday 10th Sept, conditions were very muggy, complete cloud cover and a light SW getting fresher as the morning wore on, by the time we packed up it was a nice 21 degrees C.
As the nets were erected 2 or 3 Chiff's were heard calling, but not much else. Luckily we were in for a few more than that.  It was a good morning for Chiff's and Blackcaps with the added bonus of a juv Spotfly. 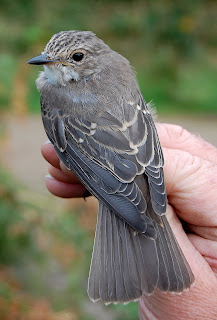 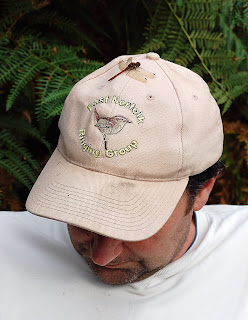 Dave and friend.
A Swift was seen flying over and a Marsh Harrier flew South down the dunes.
Several Speckled Wood butterflies were still on the wing with numerous Common Darter's about, including the male that took a liking to Dave's hat! A Migrant Hawker was also seen.
Posted by Kevan at 22:01