On Saturday evening Dave and Justin went to check out our reed bed ringing site on Haddiscoe Island. Rides were cut, nets erected and birds were caught. After ringing the small catch before darkness descended the team left well bitten by an army of mosquitos and midges.

Dave and Justin returned to the Haddiscoe Island reed bed to open the nets early on Sunday morning.

Birds quickly responded to the tape lures and Bearded Tits were soon heard 'pinging' around the net rides. The first round, however, consisted of juvenile Reed and Sedge Warblers with the Bearded Tits finding the nets later on. Most birds caught were juveniles but a few adults were nice to see including a fantastic male Bearded Tit.

Male Bearded Tits - Juv (left), Adult (right)
One juvenile Reed Warbler had a particularly warm rump and an unusually light eyes for a juv but any dreams of Blyth's were quickly dispelled with only the third primary being emarginated. 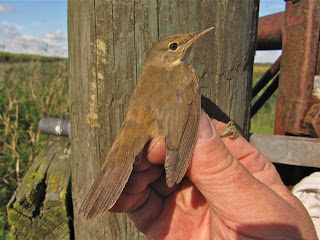 Juvenile Reed Warbler
Dave had a pleasant surprise when he pulled a juvenile Starling from the last bird bag of one round. Justin had seen a flock fly over the reed bed and finding two in a net he managed to extract them before Dave came along ensuring that their identity remained a secret. Both birds were juveniles in post-juvenile moult with one already having much greener feathers suggesting a probable male. 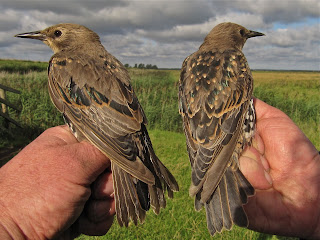 Juvenile Starlings
Despite the gusting wind it was a good catch with 62 new birds being trapped and 1 re-trap Reed Warbler having been originally ringed at the site in August 2007.
Sedge Warbler - 17
Reed Warbler - 26 (1)
Bearded Tit - 15
Starling - 2
Reed Bunting - 2
Posted by Justin at 22:56