Over the last couple of weeks due to work commitments and the weather the only ringing we have managed has involved House Martins during some evenings.
Three sites have been visited, a new site at Hickling, with Horning Hall and Waxham being revisited for the second time this year.
The new site at Hickling involved 7 houses with an estimated 35 occupied nests, Dave had done the hard work and managed to get permission from all 7.
21 new House Martins were caught together with a male House Sparrow that baled out of one of the nests. 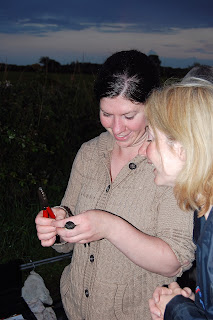 Sharon explaining the niceties of flat flies!
At Horning Hall 19 were caught with 7 new and 12 retraps, these consisted of one from 2009 and 2010 and surprisingly one originally ringed on 31/07/2007.  This is our oldest House Martin to date.
Also the Barn Owl has produced 2 chicks, the Spot Fly is having a second brood in another box nearby and contains 3 eggs.
Also seen here on the river were 2 juvenile Bar Headed Geese! Soon to be a new feral species? 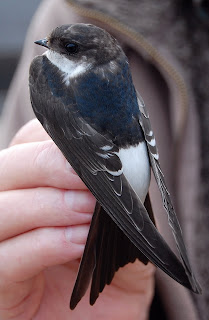 Juvenile House Martin.
The second trip of the year to Waxham Great Barn proved a success with 38 being caught, 29 of which were new and 16 of these being juveniles. 5 of the 9 retraps were last years' birds.
For a brief spell Sharon equalled the record of 6 being caught at once but was eventually beaten by Gary later on in the evening when he netted 7! 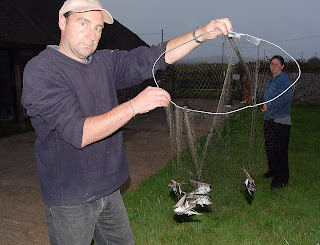 Sharon and her half dozen, Dave thinking I've got to get this lot out!
This brings the grand total so far this year of 125 new birds, 30 retraps and 1 control.
On a more serious note, is this what Gary and Kev get up to in their spare time? No wonder ringing has been slack the last few weeks. 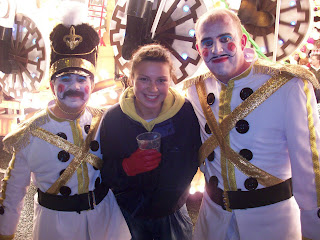 Perhaps Kate can enlighten us.
Posted by Kevan at 22:15