We have been fairly busy recently checking Barn Owls and doing some more House Martins.
Also a couple of trips to the new Little Tern colony at Caister.


Little Terns bred at Caister for the first time last year with 3 pairs present, this year with the fragmentation of the Gt. Yarmouth colony about 40 pairs have settled to breed. They are again being looked after by the RSPB, who must be congratulated on doing such a sterling job. 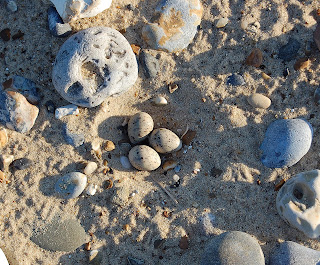 Two visits have been made with 23 pulli ringed on the first trip and 9 new with 14 retraps on the second trip.
The retraps are very important for the ongoing 'growth rate' in sea birds survey being carried out. Also on the second trip a young Ring Plover was picked up. The colony was doing well up to a few days ago but the local Kestrels have now found them to their liking. 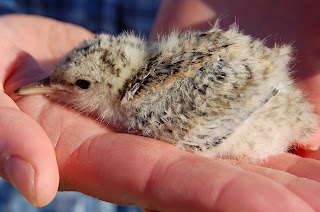 Two recent Little Tern recoveries have come to light, both birds being originally ringed at the Gt. Yarmouth colony as chicks.
The first ringed 24th July 1998 and recaught 4695 days and 454km later, on 1st June 2011 at Point of Ayre on the Isle of Man.
The second ringed 29th June 2001 and the ring read in the field! 3618 days and 208km later on 26th May 2011 at Den Helder, Netherlands.
It would be interesting to know whether they are breeding in their new locations. 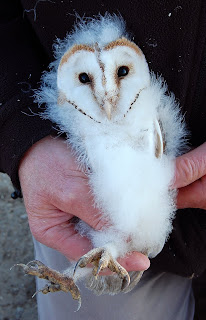 Barn Owl pulli
Most of the Barn Owls have now been checked with only a couple left to return to. They have not faired very well, a lack of prey being the obvious reason. Some sites started well but have then gone on to only produce one chick! Out of 60 odd sites checked , prey (a House Mouse ) has only been present at one site, most of the pellets have been on the small side, indicating a lack of prey.
14 Adults have been caught with 4 retraps, 2 controls and 8 new and 23 new pulli. The largest brood being 5 chicks. This is well down on previous years. 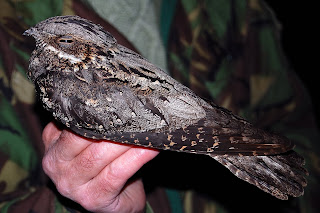 Adult female Nightjar
A recent excursion to Winterton with Nightjars in mind  produced an adult female being ringed, unfortunately the male 'bounced'! At least 2 pairs were present. Luckily the local midges decided to stay away!!
The House Martin RAS scheme continues with another 2 sites, Caldecott and Filby each producing 9 new birds, 10 occupied nest's were at each site. This brings the total up to 65 new birds, 9 retraps and a control so far this year.
Posted by Kevan at 15:58