Its that time of year again, Snow Buntings are arriving and ducks are increasing.
The first Snow Bunting turned up at Caister on 6th November a good 2 to 3 weeks later than normal with 8 being present, these quickly increased to about 30 on the  9th and up to 40 on 18th. They soon found the food we are providing much to their liking. With strong southerly winds forecast for Saturday morning we decided to have a go for these instead of mist netting.
We managed a goods catch with 38 new birds, another 4 were flying about managing to evade the net.
All were first Winter's (3) with 21 females and 17 males, it was interesting to find that we had more Nivalis birds than Insulae (18 and 10 respectively , with 10 intermediates. ) No retraps were caught, we always find it incredible that they seem to find the food so easily. 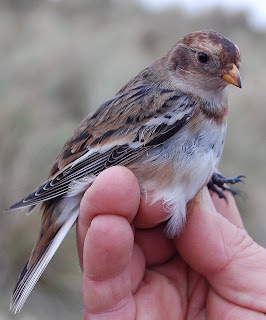 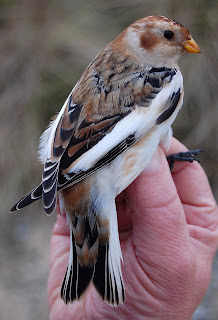 1st. Winter Male Snow Bunting, Nivalis race
While we were there several flocks of Brent Geese went past as well as several Gannet, also 3 Shelduck and a lone Red Throated Diver.
2 Grey Seal were also seen offshore.
On Sunday 13th we ventured to Hickling for a duck session, James had kindly been feeding the pond up and had reported a few duck had arrived and been feeding there. Nets were erected in the normal pattern and we waited patiently, it was quiet at first but then they eventually turned up. About 25 Mallard at first but they were having none of it and proceeded to fly off! Luckily Teal began to arrive and land on the water, using mist nets to catch these is always a bit hit or miss and eventually we managed to catch 8 out of about 100+ flying around! Still a worth while catch and enabling us to increase our knowledge of this species. 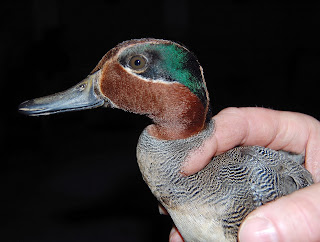 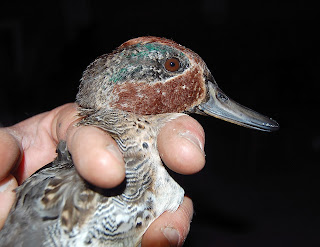 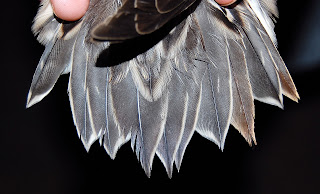 
4 Drakes and 4 ducks were caught, with all bar one being first Winter's
Thanks must go again to James for his enthusiastic support for this project.
Posted by Kevan at 21:48