Winterton was again the venue on Saturday 29th Oct. It was very slow to start, the woods being very quiet, but it picked up a bit mid morning when the Tit flocks started moving about.
The net in the dunes again produced 5 new Reed Bunting, 21 so far!
A few more Redpoll were seen with a flock of 25 flying about. We eventually caught 11 more with 2 being controls, L916247 and X157963. 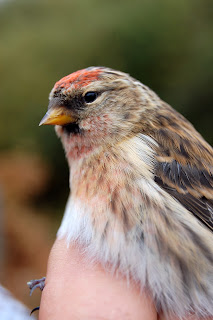 Adult male Lesser Redpoll
It was a busy morning with a few bird watcher's dropping in and seeing what was being caught, this was due to an Isabelline Shrike being present up the road at Horsey.


53 new birds, 12 retraps and 2 controls were caught making a total of 69 birds handled. Retraps in brackets.
Meadow Pipit 1
Wren  2 (1)
Robin 2 (1)
Blackbird 3
Song Thrush 2
Goldcrest 7
Long-tailed Tit 12  (7) with one from 12/09/2009 and 3 from 19/09/2009
Blue Tit 6 (3) one originally ringed 27/09/2008
Great Tit 1 (2)
Chaffinch 3
Lesser Redpoll 9 (2) both controls
Reed Bunting 5
Woodcock were again present early on when Dave flushed 3 out while opening the nets.
Dave decided to stay a little longer and do a bit more while the rest of us had to go, he was soon on the phone telling us of a Rough legged Buzzard flying over the dunes giving superb views.
On the 6th November a quick walk down Caister North beach produced 8 Snow Bunting  (no ringed birds) feeding on the food, these being the first of the Winter here. Hopefully numbers will build up in the next few weeks.
Posted by Kevan at 21:44