With the recent increase in Linnet numbers at Caister an early morning start on Saturday 17th March was the order of the day.
We arrived at 05:30 to find a cool cloudless pleasant morning, however by 08:30 it was overcast and raining. Luckily we had packed up by then as the birds were not playing ball!
Surprisingly there were still 8 Snow Bunting on the beach, they seemed a bit reluctant at first , but eventually 5 were caught. 3 were new and 2 were colour ringed birds, one of ours that had been to Kessingland and one from Kessingland, Suffolk.
All were Nivalis birds, and were probably the last of the Winter here. 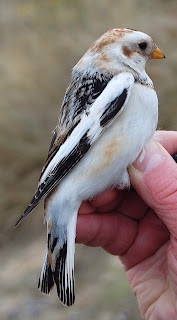 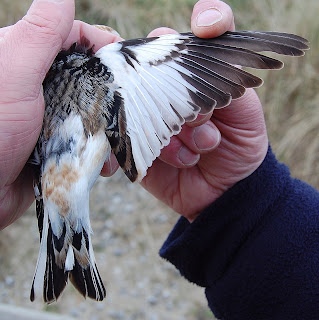 Same bird as above, showing wing and tail pattern for  5 Male Nivalis Snow Bunting.
There was a lot of Linnet activity in the area behind us and several small parties flying over the food but only one group of 5 landed. These were duly caught and resulted in 4 new birds and a retrap from 02/04/2011.
At least it's a start and hopefully there will be more to follow. 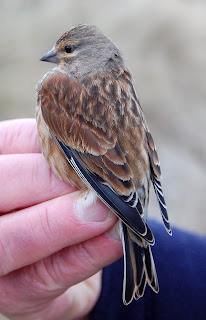 Male Linnet
While we were there Dave had a probable Woodlark fly over with 2 Skylark and a Red throated Diver flew north offshore. Also during the course of the morning several flocks of Starling were flying south.
At least 7 Grey Seals were patrolling  offshore in the breakers.
Posted by Kevan at 19:57