After the last blog we thought the Ludham cover crop had finished for the year. James and Gary however persevered in putting the seed out and Dave kept an eye on what was happening. Eventually to our surprise the Bunting numbers began to pick up, Dave estimating 60 birds present with most being Reed Bunting.
An afternoon session was decided upon, so Sunday 11th March we arrived at the site for 3pm. 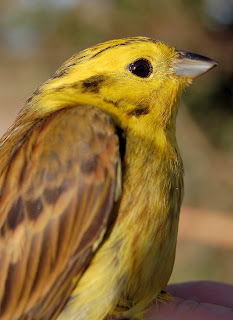 Adult male Yellowhammer.
29 birds were caught, 8 new Yellowhammer, 21 Reed Bunting of which 3 were recent retraps and one a control. The control was originally ringed at Holme BO in North Norfolk on 10th Nov 2011, quite a good movement.
With the nearby fields now ploughed up we could be in for some more in the coming weeks.
As we packed up a Barn Owl was seen hunting over the adjacent fields.
***
During the week a couple of phone calls from Winterton created the opportunity to ring  15 Jackdaws  and a Rook on the first date then another 7 Rook on the second date, fantastic! Close up these birds are superb with their purple and blue glossy plumage. 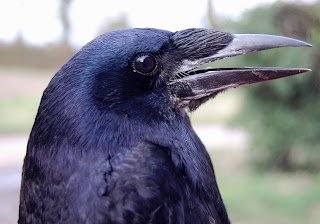 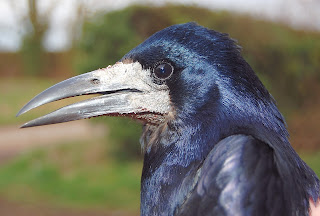 (6) Adult Rook.
Caister beach still has some Snow Buntings present with at least 21 there on Wednesday, Linnets are also increasing with 21 seen last weekend.
Posted by Kevan at 21:09