Buntings disappear but Ducks hold on.

Is it all over?
Dave and James had visited the cover crop Friday afternoon and had seen 40/50 Bunting sitting in the hedge. So with this in mind Dave and I met again Saturday 18th at the same time as last week, the temperature had risen to 9.5 degrees C, incredibly 17.5 degrees warmer than last week!
This probably reflected the number of birds in the area, a maximum total of only 15 Bunting were seen, perhaps at last they have moved on. 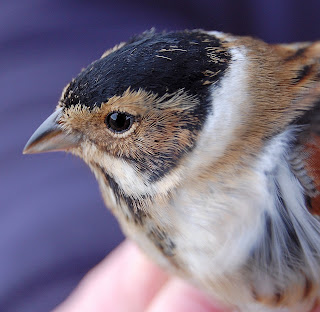 Male Reed Bunting.
Only 8 birds were caught, these being 6 new Reed Bunting  plus a recent retrap and a Yellowhammer from a couple of weeks ago.
A superb Male Peregrine was seen belting over the fields, perhaps another reason the Buntings were in hiding. 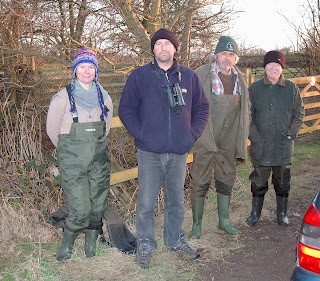 Waiting in anticipation.
The recent cold spell has increased the Teal population enormously. With the continent freezing up a lot of birds had moved over here. James had been feeding a couple of ponds and had over 400 Teal feeding on each one, the largest number he had seen in a long time. Unfortunately for us the temperature was rising throughout the week and mean't that some had moved on. 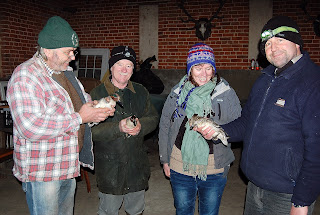 Some of the team with their prizes
We arrived Sunday afternoon at Hickling to erect the nets, there was a brisk Northerly wind blowing. The normal zigzag pattern of nets were put up, the birds were late arriving but then kept on coming for what seemed ages.
At least 250 Teal tried to land on the pond and we managed to catch a creditable 15. The catch comprised of all new birds with 7 Male and 8 female Teal.
In addition at least 5 Woodcock were seen in the area  at dusk.
Posted by Kevan at 21:04