Two more visits to the Ludham cover crop have produced yet more Yellowhammer and Reed Bunting.
For a change we decided to have an afternoon session, so on 4th we arrived at 2pm to set the net.
There were a good number of Buntings in the hedge, small groups of 5/6 birds kept landing on the seed and then were duly chased off by the territorial Blackbirds !
10 new and 2 retrap (one originally ringed 14/02/2009 ) Reed Bunting, 3 new Yellowhammer and a retrap Blackbird were processed. 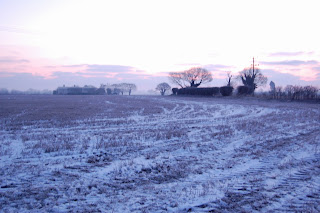 Brrrrrrrr !
The second visit on the 11th was as usual in the morning, when we arrived at 6.45 am it was a cool -8 degrees C ! When we packed up at 11.45 am the temperature had risen to a balmy 0 degrees C !
About 50 Bunting were in the hedge with the Blackbirds again holding court on the seeded area. 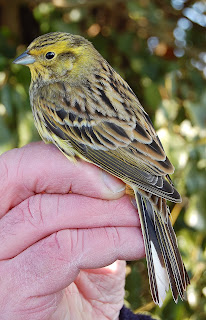 Female Yellowhammer
The catch was similar to the week before with 10 new and 1 retrap Reed Bunting, 8 new Yellowhammer and 4 new Blackbird being caught.
Posted by Kevan at 20:50