More Yellowhammers were on the menu when we revisited the cover crop at Ludham.
James and Gary have been doing a sterling job in keeping the seed topped up, the ravenous hordes of Wood Pigeons have been taking their toll!
At least 50 Hammers and the same amount of Reed Bunting are still in the area, a few Linnets are still about as well.
21st January dawned and was very windy, we also had to batten down the hatches when a rain squall hit and made a dash for the cars. Luckily we had a wind-break that gave us some limited cover. 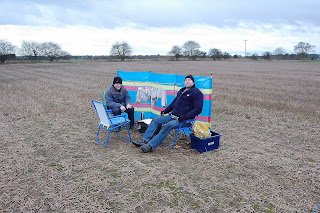 Not much cover here !
Considering the conditions we were able to catch 17 new and 1 retrap.
Chaffinch 2, Yellowhammer 7 and Reed Bunting 9 including a retrap from a couple of weeks previous.
On 28th January we arrived at Caister pre dawn, the weather for once was quite favourable with a light NE but quite chilly with no frost.
The Snow Bunt's had not been seen for a while but the seed had been disappearing fast, so we assumed there was still a few about. During the morning about 120 were seen, we managed to catch 46, they were playing very hard to get.
Of the 46, 19 were new, 7 colour ringed and 20 retraps (19 from this Winter and one originally ringed 27/11/2010). Most were 1st Winters with only 4 being adults and 37 were of the Nivalis race.
The colour ringed birds were made up of 4 originally ringed at Kessingland, Suffolk and the other 3 originally ringed at Caister  then colour ringed on their travels to Suffolk.
Of note 2 colour ringed birds were reported at Salthouse, Norfolk on 25/01/2012, one from Caister and the other Kessingland. Thanks to Colin again for his colour ring project, it seems to be paying dividends now.
Posted by Kevan at 22:12