We were all looking forward to a nice Easter weekend with a bit of ringing, however it turned out to be cold, damp and windy with Easter Monday a complete washout .
We did manage a few bits and pieces, starting at Caister for the Linnets on Good Friday.
We arrived just before sunrise to be greeted with a hard frost, even the sand was frozen and a temperature of -4 ºC!
20 new and 5 retraps, 4 being recent and one from 12/03/2011 were caught.


Saturday morning we were hoping for some migrants at Winterton, unfortunately the day dawned with a cold NW putting a stop to any new arrivals.
Luckily some had already arrived and the first Blackcaps and Chiff's were duly caught, but not much else was going on. 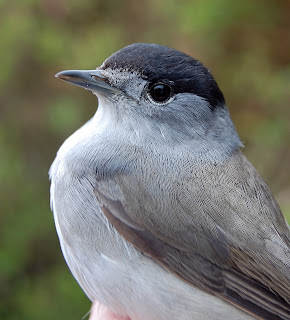 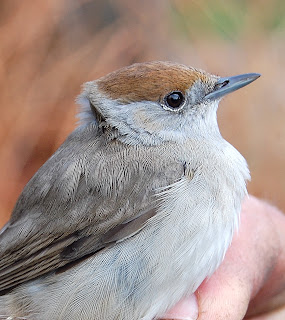 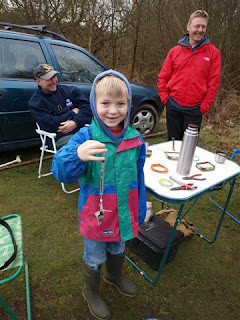 Monty with 'his' Dunnock


Later on in the morning Arthur arrived with his Son and Grandson to explain the ringing, they both seemed at home with the birds and became very interested in them. 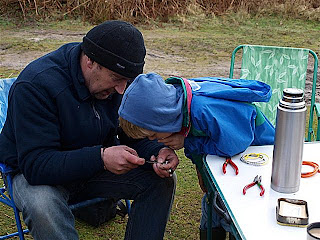 Dave explaining to Monty how to measure a Goldfinch wing.
As we took the nets down 3 Adders were seen basking in the sun?! They must have been desperate for a bit of heat.
On arriving home a Chiff was heard calling in the garden so one 40' net was quickly erected, resulting in it being caught with 2 Blackcaps, a nice end to the weekend as the weather deteriorated.
On Tuesday it was back to work, so of course the sun came out and the wind dropped!!! A phone call was received mid morning from Winterton to say a few more corvids had been caught. Luckily for us but not him Tony was at home instead of work as his car had broken down, so he was quickly deployed to go ring them. This resulted in another 27 Jackdaw and 2 Rook being ringed.
Posted by Kevan at 22:05