With the appalling weather forecast for Saturday and various members out of action, Winterton was postponed until Sunday. A look at the weather late Saturday afternoon didn't fill us with optimism so we decided to call it off. Yet again we made the wrong decision or so I thought, as Sunday (28th Oct) dawned with a cold but light NW.
I decided to put a couple of nets up in the garden at Ormesby as there were at least 25 Blackbirds coming in to the downfall apples.
On the first net visit a Blackbird and a Finch were in the net and duly extracted. When approaching the Finch it looked streaky and I thought to myself  'that it was a bit late for a juvenile Greenfinch', on inspection there was no green or yellow colours on the bird. Several species then ran through my head but I dismissed them all, it was either something good or some sought of hybrid.  It suddenly dawned on me that the only thing that fitted was a Common Rosefinch.
Dave was called and I said the immortal words  'I've caught a bird and I am not totally sure of what it is, ' with this Dave was in his car and on the way round.  Several books later and with Dave seeing the bird, it was definitely a Common Rosefinch!  The first I had seen in the Autumn and in this Plumage, a few minutes later with Mel doing the Telephone calls Tony, Tina, Gary and John arrived to see the bird. 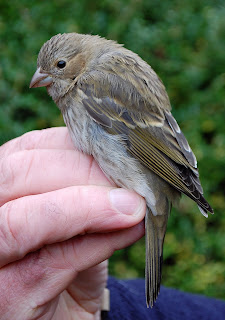 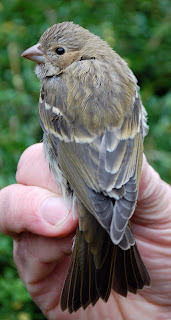 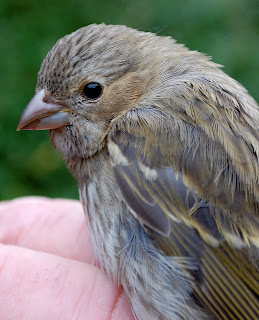 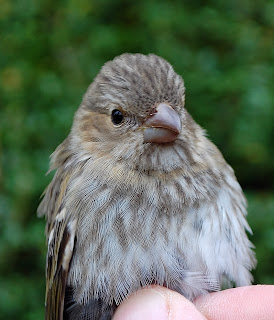 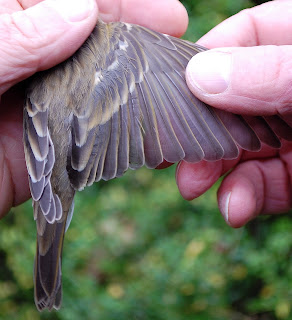 It was aged as a 1st Winter (3) and had a wing of 85mm and weighing 22.8g.  It flew off strongly when released and unfortunately has not been seen since.

Later on in the afternoon 2 Barn Owl sites were checked after tip offs from their owners to say something was going on in the nest boxes, both contained  a chick and both are second broods, these being successful earlier in the year.
Posted by Kevan at 22:20