Saturday (27th) morning dawned mild and dry with a moderate Southerly wind and we were again at Caister with the hope of catching some Linnets.  It was going to prove to be an eventful morning. 41 were seen in the area the previous evening with 19 on the seed, so there were at least some there! No Snow Bunting were seen, so they have started the northward journey back.
The net was set, then its sit back and wait for the birds to come in.  They started to arrive in 3 and 4's alighting on the nearby telegraph wires, soon they had amassed to 50, watching us to there amusement!

Some of the goup discussing the finer points of Linnet ageing and sexing.
The final tally was 32 new and 2 retraps, both from March 2008.
There were some memorable scenes during the morning with Justin 'cartwheeling' down the beach, Dave and Tony doing some kind of beach race and Arthur having a dog trying to pee up his leg thinking it was a bush !!!! 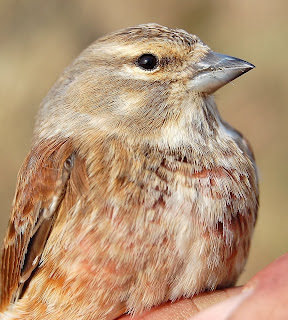 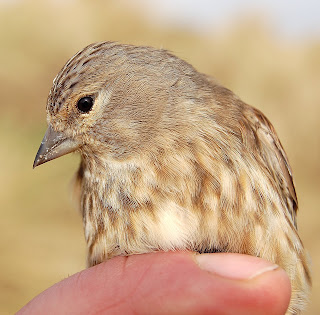 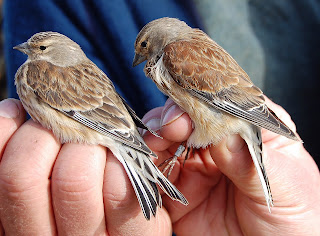 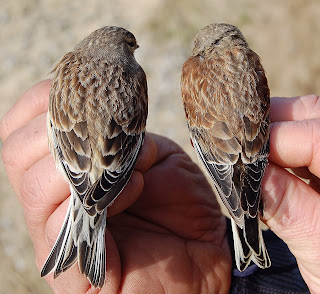 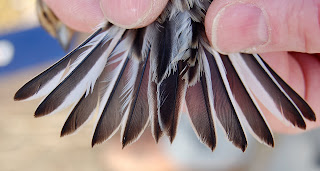 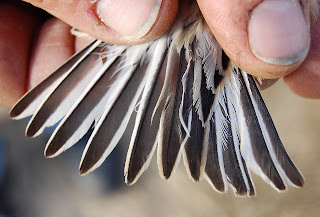 Adult type tail feathers (4/6)
Spring migration was observed with the first Swallow of the year going South, Grey Wagtail North and 35 Jackdaw coming in off the sea. A Wren was also seen nest building in a nearby Gorse bush.
3 Porpoise were watched feeding offshore constantly breaking the surface and a Grey Seal nearby.
Posted by Kevan at 21:55