Over the weekend more migrants have been arriving. The first Swallows were seen over the garden at Ormesby on Friday, Saturday had Wheatear at Caister, several Chiffs and Blackcap at Ormesby and Sunday produced a singing Willow Warbler at Caister and Brambling at Ormesby.


The most Stunning news was Sunday afternoon when several people had rang to inform me that a Juvenile White- tailed Eagle !!!! was moving along the coast and may be heading my way ! We moved to the garden and started to look skywards, after 3/4's of an hour we were beginning to feel it wasn't our day. Another phone call was taken, it was at Winterton now and still coming our way. This called for desperate measures, armed with my bins I scrambled up our  bungalow roof to get an all round view. Within 10 minutes there it was flying first East then on seeing Caister turning south towards Gt.Yarmouth , it was putting up everything in its path. A shout to Mel had her in the front garden watching it also. What an awesome bird !
Thanks to All for the updates and calls,it was tracked a very long way (from Lincolnshire thru' north Norfolk to east Norfolk) and could still be in the area for tomorrow morning. 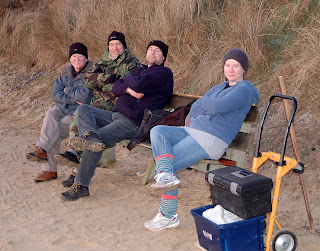 On Saturday we were again at Caister for some more Linnets, there were about 40 in the area.
18 were caught with 17 new and a retrap from a couple of weeks ago, the males are starting to look very handsome now........(no not the picture above, the one below....) 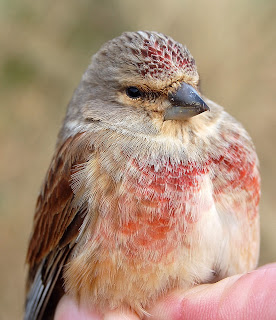 Mr. Handsome
Several small flocks of Linnet and Chaffinch were moving through south all morning and 7 Shelduck flew north offshore.
Posted by Kevan at 22:18