Our annual jaunt to Martham woods and fishing ponds took place on Easter Monday, Arthur was also available after a busy weekend.
The nets were erected the evening before ready for dawn the next day, the first Cuckoo of the year was heard.
As usual Sharon supplied the cakes ! Saturday it was chocolate fudge brownies and today it was Mum's Easter buns, very nice. Easter eggs were also supplied by Justin on Saturday. 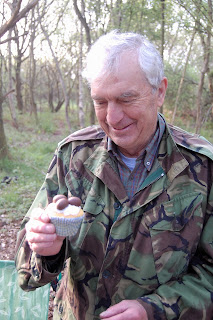 Arthur with his bun.
It was another sunny day , but with a keen NE wind blowing making it feel a bit cooler.
An excellent mornings ringing was had with 57 being processed, 21 from the ponds and the rest from the wood.
Several firsts for the year being, Cettis/Reed/ Sedge and Grasshopper Warblers, Jay and the first pulli being Tawny Owl. The morning will also remembered as not one Willow warbler was caught, historically this has been one of the better sites for this species ! 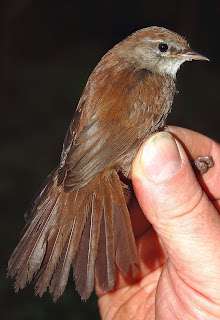 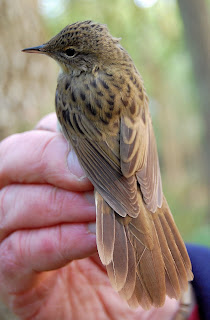 Gropper
The big surprise was catching a male House Sparrow , a first for the site ! 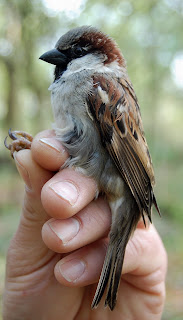 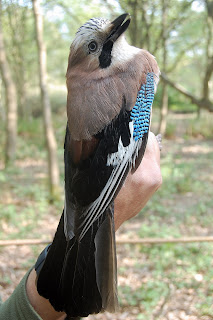 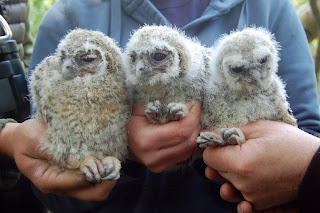 Tawny Owl pulli, Lunch in the box was 2 young Rats.
Crane's could be heard calling in the distance.
Several Speckled Wood butterflies were on the wing, and a pair of Large Red Damselfly were seen. 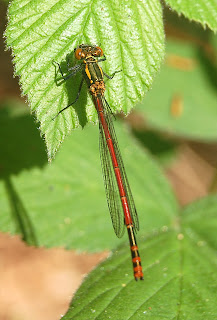