It has been a bad weekend for mist netting, a trip planned for Saturday had to be shelved at 4.30 am, all because of the strong Northerly winds that continue to blow.
Lapwing pulli were on the agenda for Bank Holiday Monday at Haddiscoe Island, unfortunately due to the dry weather at the moment there are no flashes of water and the grass is too long, so all this has had an adverse effect on the breeding attempts.
There were several pairs seen and a lot of mobbing going on, but no young were seen, only a couple of nests presumably with eggs.
Also as usual several pairs of Redshank, Oystercatcher and a Snipe were seen 'mucking' about, but nothing definite was happening.
Also on the wader front were several Whimbrel, Bar tailed Godwits and a Common Sandpiper seen but no Avocet. 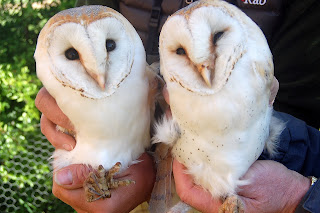 All sweet and innocent , Mother (right) and Son
The biggest surprise was to come when we checked a Barn Owl box on the Island. Both adults were caught coming out of the box and both were retraps.
On checking the ring numbers it was found that the female was previously ringed as an adult breeding in another box on the Island on 16/05/2009, no big surprise!
But when we checked the males number it was found to be one of the females young from that year, ringed on 11/07/2009 !!!! One egg was in the box,so now the mother is breeding with her own son !!!!!
The female weighed 415 grammes so was in good breeding condition, it will be interesting to see if anything hatches or if they are infertile. 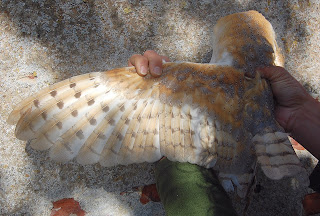 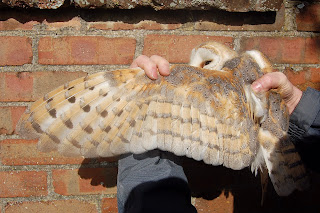 Female wing pattern
Another Tawny Owl was checked at Lound and contained 3 pulli ready to ring, all doing well. The female was close by watching us. 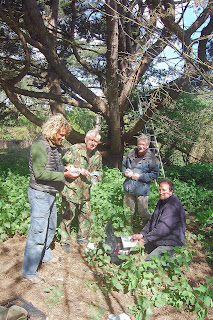 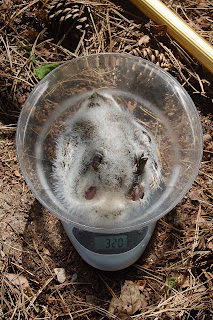 One of the chicks being weighed
A trip to North Norfolk on Sunday saw plenty of Green Hairstreak on Salthouse Heath amongst the Gorse bushes, always a superb insect ! 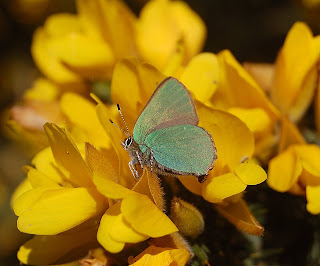 Green Hairstreak
Posted by Kevan at 20:35