On Tuesday evening we Belatedly checked some Owl boxes, we have been waiting for the wind to die down!
7 Tawny Owl type boxes were looked at, which resulted in the following occupants 2 Jackdaws one with 5 eggs the other 5 small chicks, another Tawny Owl with one chick, Stock Dove with 2 eggs, One with a Grey Squirrel ! and the rest empty. 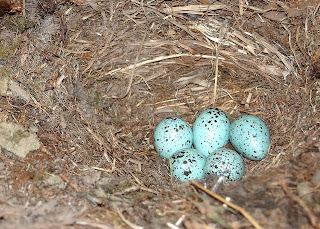 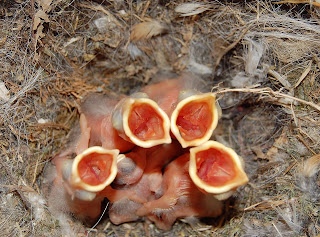 5 recently hatched Jackdaws, one is hiding !
An adult Stock Dove was caught exiting one box and was a new bird to ring. Gary also managed to net a Squirrel ! but luckily for us escaped before we were bitten extracting it.
At the Tawny box the adult female was caught and proved to be old faithful, a bird that was originally ringed 07/05/2007 and also retrapped 18/04/2009. It was good to see that she is still going strong. Apart from the one chick the box also contained the hind quarters of a baby rabbit that was bigger than the chick! 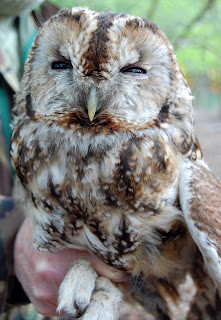