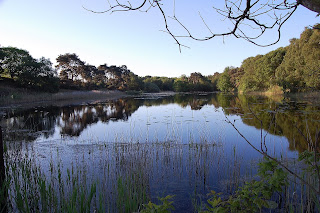 Lound Lakes
On Saturday 14th May we arrived at Lound Lakes for a ringing demonstration, the punters were already there on a dawn chorus walk, they arrived at our ringing station about 6.45am. The net rides had been prepared by Justin  a fortnight previously, Dave and Justin erected the nets on Friday night to save time on Saturday, this enabled us to open up at the leisurely time of 6am.
The forecast wasn't brilliant, but we managed a good session with no rain. A moderate NW  made it a bit cooler than recent. 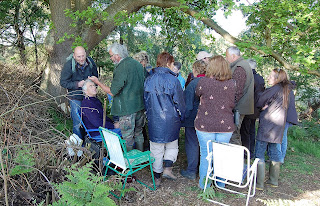 Arthur, Dave and Justin are in there somewhere ! Tony is about to release a bird.


We managed to catch 35 birds with 31 new and 4 (retraps), there was a good selection of species and enough birds to keep everyone happy.
Tea and croissants were supplied by Holly and Claire , Thank you ! 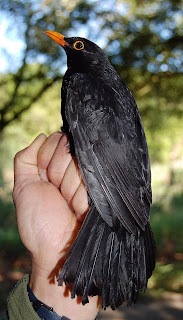 One of the stars !


Also seen were Common Sandpiper, Kingfisher and Hobby with a Water Rail heard only.
Justin informed us that he had found a Snake skin near to one of the rides during the week, this was 2 metres long and had a Python pattern on it !!!!!!! Fortunately we never came across the owner, however we did see a couple of Grass Snakes warming up under a tin sheet. 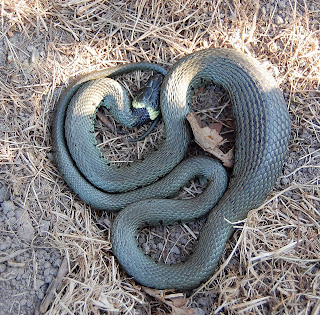 Looks like it is still digesting a recent meal.
RARITY ALERT !
We all saw something today that will go down in ENRG history, you had to be there to believe it ! Some of us still think we were dreaming, but thankfully Arthur has the proof in his pocket.
Dave actually handed over some money, he wasn't happy and didn't want to let go ! Hopefully he will get over it and be able to carry on, it didn't help that after the demo he went on to ring 48 Tit pulli out of his own pocket as well. 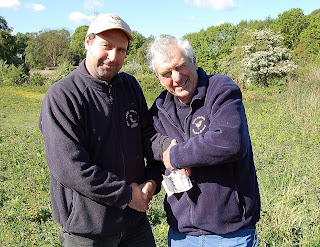 Arthur doing his best to get the cash.
Posted by Kevan at 20:28