Cuckoos at the crane

The crack of dawn really is early but it was at 03:15 that Justin and Paul arrived at our Martham site to put up the nets in anticipation of catching cuckoos that have been heard since end of April. Phil Atkinson and Chris Hewson from the BTO International Research team arrived shortly after. Justin with his trainer Paul Noakes have been helping Phil and Chris with a BTO project to track cuckoo migration by fitting birds with small (5g), satellite transmitter tags. Given that the additional weight that each bird can carry is limited for welfare issues the BTO had already decided that the minimum suitable weight for any cuckoo would be 115g. This limitation meant that more cuckoos needed to be caught to meet the required number of five for the project so Justin suggested that permission was given to catch birds at Martham.
The nets were erected, decoy cuckoo installed and tape lure played and shortly after the first male arrived and promptly perched on some scrub scrutinising the decoy. Fortunately it was at this moment that Tony drove up and the bird took flight straight into the net. A short sprint through long wet grass and the bird was extracted, brought back to the BTO vehicle and weighed by Tony. A smile announced that it was of a suitable weight and after Tony had ringed his first adult cuckoo the BTO team diligently fitted the harness mounted satellite tag. 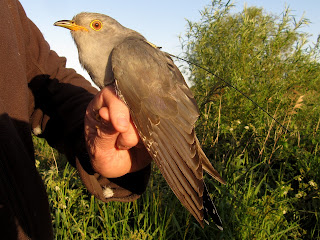 5M cuckoo fitted with 5g satellite transmitter
Whilst the first bird was being processed another bird found the large mesh nets and Justin returned with a female. Sadly few female cuckoos are above 115g and at 101g this bird was duly ringed and released - a second adult cuckoo for Tony! All was not yet lost for before Phil and Chris had finished fitting the first tag another male had found the catching area and after several agonising minutes Tony was running to the nets to extract it. Justin ringed and weighed the bird and at 118g a second Martham cuckoo would be participating in this important research project.
In total 6 males and 2 females were present in the area with 2 males and a female caught - a good morning!
Posted by Justin at 12:12