We again attended the Barton Broad 'Go Wild ' day this year. It took place on Sunday 22nd May and was organised by The Norfolk Wildlife Trust.
There were several other organisations and displays present. The weather was dry and sunny but the unrelenting wind done us no favours. 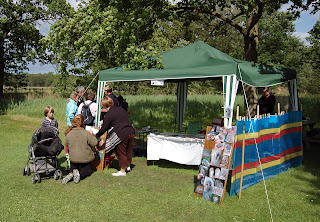 Mel sorting the picture quiz out.
Birds were few and far between, luckily for us Mel came along and organised a bird picture quiz that went down well in between birds and a prize was given to all correct answers! The younger attendees also enjoyed Arthur explaining the way we catch birds in mist nets, cuddly toy birds (supplied by Gary, much to his grandsons' dismay!) were thrown into a 20' net and then extracted, bagged and brought to the ringing table. 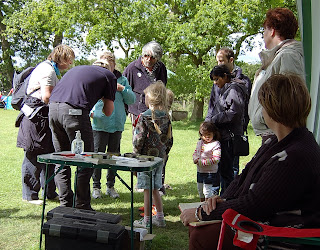 Dave doing what he does best....... talking !
Justin done most of the ringing until Sharon turned up and ringed the last 2 which included the bird of the day a Gropper. We did have a couple of more nets up this year and some feeders were put out in advance but due to the wind we caught about the same as last year. 21 new birds were ringed.
Great Spotted Woodpecker 1
Robin 2
Blackbird 4
Grasshopper Warbler 1
Sedge Warbler 3
Chiffchaff 1
Marsh Tit 1
Blue Tit 3
Great Tit 3
Chaffinch 1
Reed Bunting 1 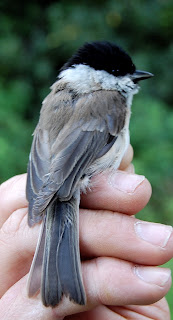 Marsh Tit
Thanks must go to Dave and Justin for cutting the rides, Dave again for putting the feeders up and Mel for the Quiz and photo displays.
Posted by Kevan at 22:02