This year we are catching House Martins for a RAS Study and need to catch around 100 birds ! Our first session was on Thursday 16th at Horning Hall, this has been a very productive site for this species for a number of years now. 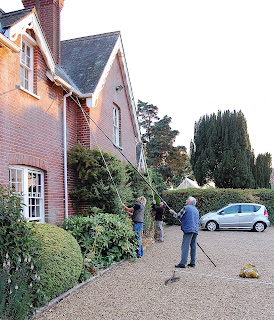 Nets at the ready !
This technique was first shown to us a number of years ago by the late Sandy Hill, who was ' Mr.House Martin' . He had written several papers on the subject and also compiled the House Martin entry for the BTO Migration Atlas. A very knowledgeable and informative gentleman. 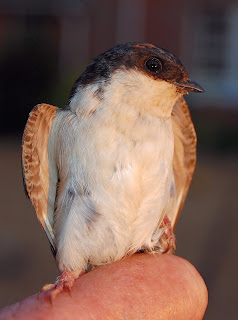 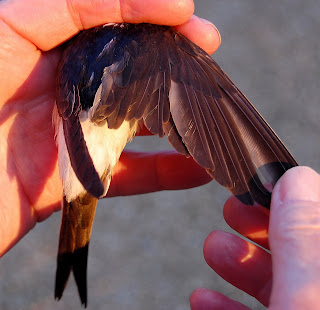 Adult House Martin
29 House Martins were caught, 24 were new and 5 retraps, 12 proved to be females and 17 males, no youngsters were caught.
Of the retraps 4 were originally ringed as adults in 2010, the other was ringed as a juvenile on 13/07/2009.
A very good start for the RAS project. 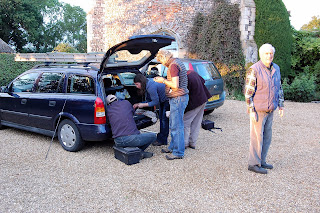 The Spotted Flycatchers nest was checked and found to have 3 recently hatched chicks and 2 eggs, hopefully the weather won't put them off and should be ready to ring mid week.
On Wednesday night the lure of a 1st. Summer male Red Footed Falcon at Horsey proved irresistible. It was present at the beach end of the Nelson Head track and was seen hawking for Dragonflies over the fields.
Also present in the same area was a Hobby doing the same thing. 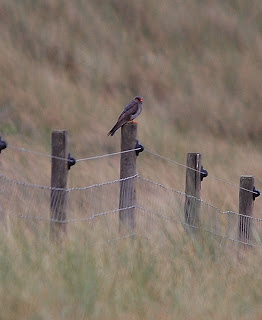 I need to win the lottery to get a bigger lens ! 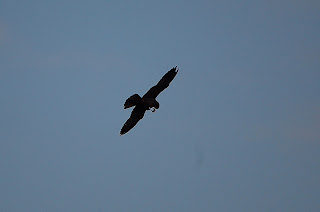 1st. Summer male Red Footed Falcon doing what it does best, catching Dragonflies.
Its still present at the moment, Friday, but maybe finding it hard to catch Dragonflies in the rain and strong winds we are now getting !
Posted by Kevan at 19:13