It's been a busy few weeks recently, checking boxes takes a lot of time!
All the tit boxes are finally finished, they have done quite well this year. Blue Tits seemed to be on average a week earlier than Great Tits, this is unusual for us as its normally the other way round. Most fledged well and there seems to be a lot of young ones about now.
One box at Ormesby contained an unfortunate individual with a swollen head, the rest of the brood (9 others) were fine. We did check the box later after fledging and it had gone, so may have fledged after all. 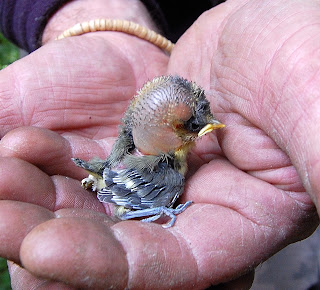 Not looking too good!
We are now checking the larger boxes for Barn Owls and are finding that some areas are doing well  while others not. The Caister/Ormesby areas seem to be struggling while Potterheigham/Martham /Hickling areas are doing well.
The usual suspects have been found nesting, if Barn Owls are not present, Jackdaws and Stock Doves are all too ready to move in. 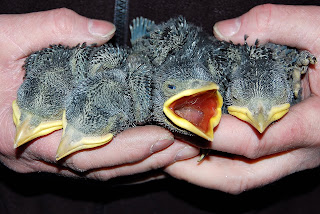 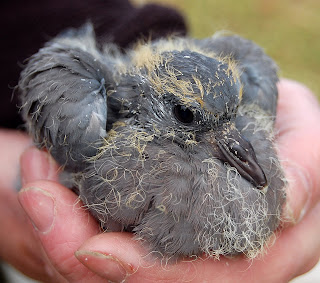 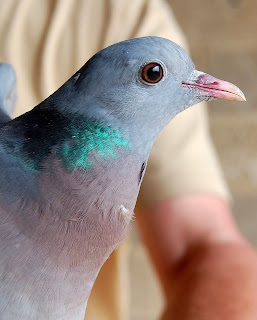 Adult Stock Dove
Two of the Barn Owl boxes have contained dead female Kestrels, both long dead, we assume they starved in the Winter. One was ringed and is a control EL44851 (any takers?)  On a brighter note we have at last had a pair of Kestrels nest in a purpose built box with 5 chicks present. 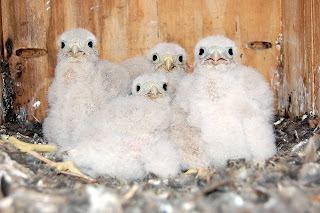 5 Kestrel pulli (one is camera shy).
The Barn Owls have been interesting to say the least,  no young have been ringed yet as they are too small at present.  Largest clutch being 2 young and 5 eggs, another having 6 young. Several have 5 eggs. Interestingly none of the boxes have contained any prey items, Gary has been collecting the pellets at all sites to try and find out what they are eating and what mammals are present in each area, this will take some time!
At four sites the females caught proved to be different birds from last year, so where have all last years females gone? Two controls have been caught so far GC68232 and GF65522, also a  retrap female proved to be a chick that was ringed  at another site nearby last year. 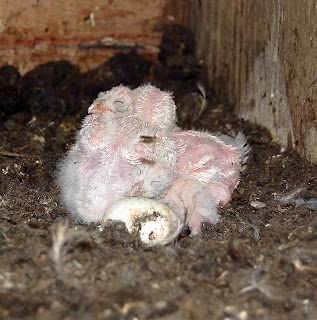 Barn Owlets
At some sites Swallows have been present and several broods ringed so far, these also seem to be a week or so earlier with some already on the wing, however others are still on eggs. 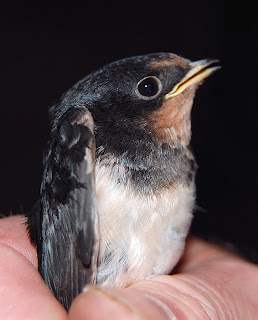 3J Swallow
More good news at Horning was a nest of Spotted Flycatcher with 5 eggs, historically this has been our only reliable site for the species with 3 or 4 pairs breeding up to 5 years ago, but now has become quite a scarce breeder. We have not found any for a couple of years now, this year there may be 3 pairs present, fingers crossed!
Several species of Dragonfly have been seen on our travels; Black Tailed Skimmer, Norfolk Hawker, Four Spotted Chaser and Hairy Dragonfly. Butterflies have included Red Admiral, Wall Brown, Small Tortoiseshell and Common Blue. 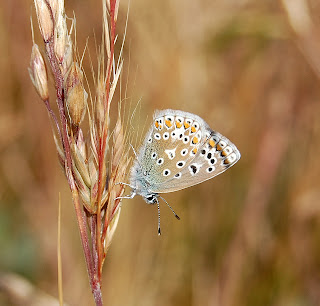