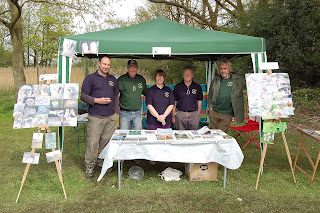 The team and stand at Barton Demo.

For once the weather was on our side, the last couple of years have been hopeless for us at this event due to strong winds and scorching temperatures.
This year it was a bit of a lie in as the event didn't open until 11am, we arrived at 9 to sort out the stand and erect the nets, the usual ones were employed. We had already been over and cut the rides and put some feeders up, to try and build the numbers up. Dave went over again on Friday just to top the feeders up , unfortunately some had already been attacked by the local Grey Squirrels !
Also on the morning of the event we had checked a box and found it had 2 chicks inside, this was to become our star attraction..... 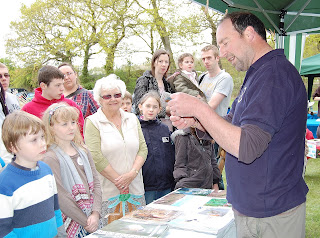 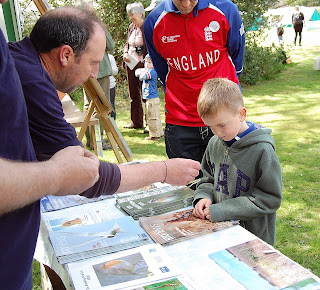 We had a steady flow of birds with a good cross section of species through the day which was ideal for a demo such as this.Everyone mucked in with Dave, Mel and I staying at the base with Gary and Tony doing most of the net rounds. 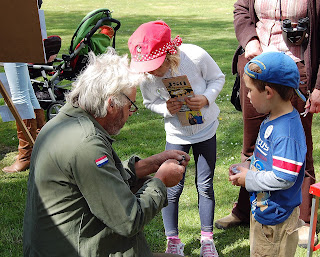 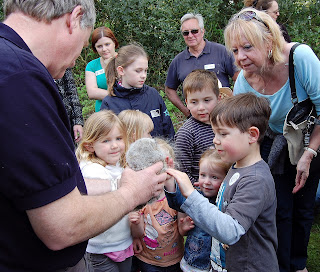 Tony and Gary getting in on the act.

As mentioned earlier the 2 stars of the show were 2 Tawny Owl chicks from a nearby box.These were very popular with the visitors, with about 50+ people around the stand at this point !!! One of the Owlets even received a name, Ruby, because of its red eye lids. 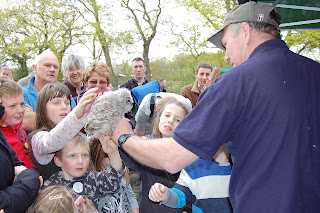 Kev and one of the stars. 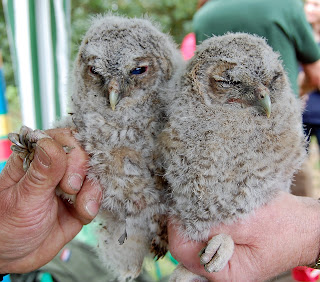 The stars of the show.

Thanks must go to Mel for all her hard work on the day and for sorting out the photos and stand. Also for inventing another quiz for the children , this time a young and adult bird matching quiz.
A 20' net was erected near to base and Gary's bird finger puppets were again used to show how the birds get caught in the net, this also went down very well.

Several Speckled Wood  Butterflies were seen during the day as well as single Brimstone and male Orange Tip.
A female Marsh Harrier was seen over the reed bed and a Water Rail was heard early on.