We have been trying to get  to Caister for Snow Bunting for several weeks now,unfortunately the weather has been awful.
Its been a quiet Winter here for them with a flock of around 40 most of the time, 54 birds have been ringed in just 2 visits. It did peak at 63 in November, recently numbers have dwindled and finally disappearing on Wednesday 13th when the last 2 were seen.
We finally made it there too late on Saturday 16th !
However a few Linnet had started using the area with around 25 birds there. 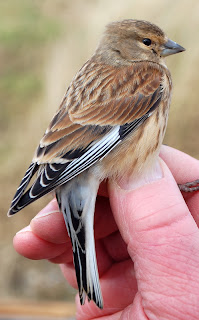 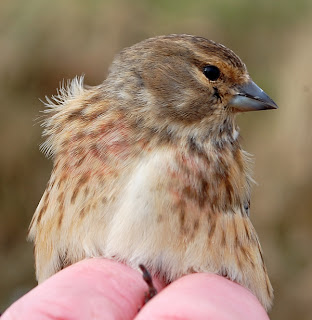 The same bird , not really in it's Summer finery yet. 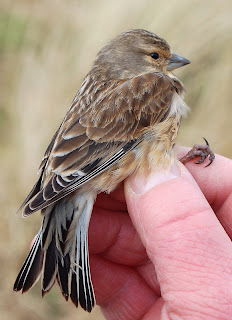 15 Linnet were caught plus 2 retraps, these both originally ringed on 06/04/2012.
While waiting for the Linnets to turn up a 1st Winter Glaucous Gull flew north at 06.10 then was seen on the beach at 07.00 to 07.10.
There has been large numbers of Gulls at Caister recently due to a wreck of Razor fish,also present were 3 Med Gulls.
Offshore 3 Gannet and a Brent Goose flew north with a Red T Diver on the sea.

In other news Dave has had some success in catching a few Siskin in his garden at Rollesby.
While in mine at Ormesby they are an infrequent visitor, so when 3 were seen on the feeders it was quite a surprise. One male was caught on Sunday, see below. 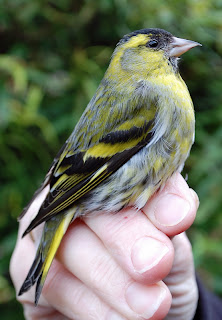