Saturday 2nd March saw another visit to the cover crop at Ludham. We were joined by a new ringer to the area , Jason.
James has continued feeding the site ,Wood Pigeons are still a problem and continue to gorge themselves, however a feeder has been placed in the hedge and this has enticed a few birds back. The idea was to take this away when we used the whoosh net to get them back on the ground, they seemed quite reluctant to do this with only a few taking the plunge.
14 birds were caught with 8 new and 5 retrap Reed Bunting and a single new Brambling.
About 200 Bewicks and 15 Whooper Swan were seen flying in during the morning and a Common Buzzard flew over. 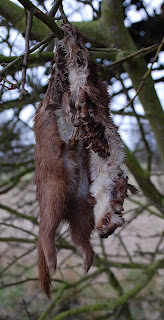 When we were last here Nathan had found this half eaten Weasel impaled macabrely in a Hawthorn bush.

The afternoon was spent at another duck pond in Hickling, John had kindly invited us along and had continued to feed there.
About 30 Shelduck, 20 Mallard and 10 Teal were seen near the pond, so we had high hopes. Unfortunately the pond had been stirred up quite a bit by the ducks so had made the bottom quite muddy and gooey !
This made it very hard going. 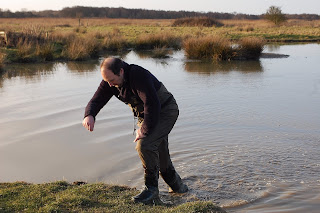 Dave hauling himself out 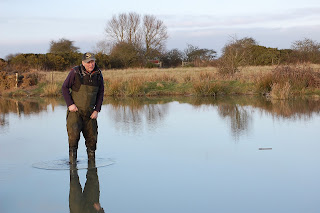 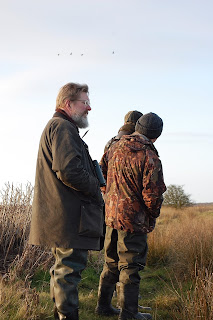 Mick and team contemplating where to put the nets,  with 4 Cranes(use your imagination !) flying overhead having a look.

Several birds came in but luck wasn't on our side and we only caught 3 new Teal, we did have 2 Shelduck 'in' but they escaped before we could get to them , never mind !
Good birds were everywhere with at least 10 Marsh Harrier, Merlin, 2 Barn Owls, 3 Snipe and 4 Cranes being seen and good number of Bewicks and Whooper Swans flying overhead. Large numbers of Pinkfeet could be heard in the dark.
Posted by Kevan at 22:00