Saturday 24th saw the whole group eventually meeting at Winterton at 5.30am or there abouts! Derek was again on his travels.
There was no frost forecast for the morning , so the nets were again erected the night before.
The day did not start well with Arthur not hearing his alarm clock, not enough poles being brought and a distinct lack of birds about. Tony and Justin came to the rescue by felling a Birch to make another pole. Justin cut it down with a penknife saw and Tony then tidied it up using an axe, Ray Mears has nothing on us! 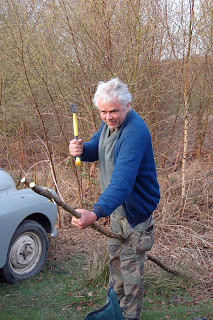 Ray Mears impersonator
We had several visitors during the course of the morning, Ted popping in on his bike looking for Treecreepers  and Pete just having a look to see what was going on . Pete then went back along the dunes and later rang on his mobile saying a Red Kite had just flown over our heads, unfortunately we were not lucky enough to see it!
We did have a flyover Yellow Wagtail and caught  our first Whitethroat and Sedge Warbler of the year. 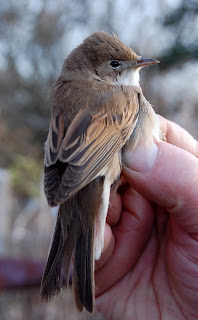 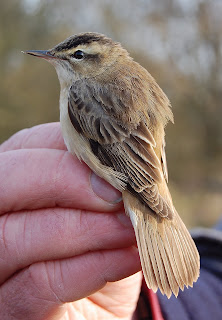 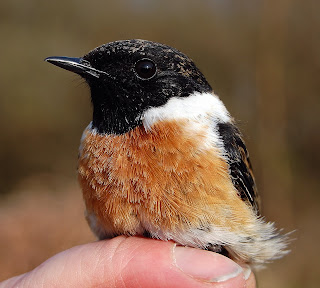 5M Stonechat
The morning will be remembered for a small fall of Blackcaps, with one bearing a Belgian ring, also one with pollen around its bill suggesting a movement from a warmer climate. The total number of Blackcaps present in all the woods at Winterton would be mind boggling. 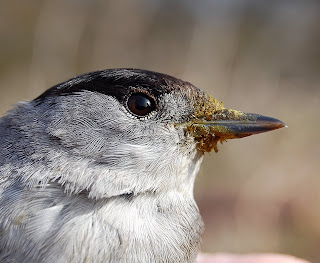