Saturday 10th April started with a depleted team arriving at Caister early morning for Linnets again.
It was a beautiful morning, plenty of sun and a cool light northerly blowing, with no rain forecast !!!
This will be the last time this Spring, so they can go about the duties quietly.
There had been a build up of more new birds during the week with at least 50 in the area.
The bird's were already feeding on the seed when we arrived and this made Dave mutter a few expletives under his breath!
We had another good catch getting 28 new and 3 retraps ( 2 from 2008 and 1 from 2 weeks ago).
The only interesting sightings here were of 2 Greylag Geese flying South offshore and Dave seeing a Sand Martin.


Later in the morning  at Arthur's garden the first pulli of the year were ringed, 3 Blackbird. Also news was recieved from Tony of a Mistle Thrush nest with 1 newly hatched chick and 3 eggs.


Meanwhile Mel and I went to Winterton so we could put up some tit boxes, in the northern woods, better late than never I suppose ! 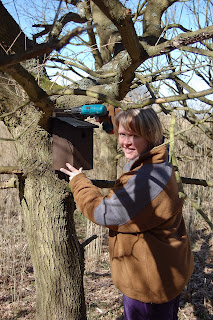 Mel getting her hands dirty !
Spring is definitely here now with at least 3 Chiff, 3 Blackcap and Willow Warbler all singing. A large Grass Snake was also seen.

A sign of Spring,  everybody  say aah !
Back at home yesterdays Blackcap continued to be seen on the lawn eating over ripe pears. It was joined briefly in the afternoon with a male Brambling!
Several butterflies were on the wing with at least 6 Peacock and 6 Small Tortoieshell seen. 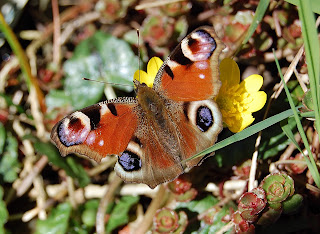